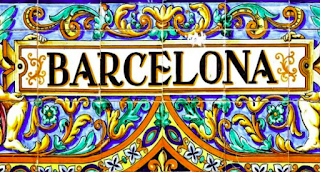 I moved to Barcelona after graduation. I'd never been there before, didn't know anyone there, and didn't really have a firm goal. I just wanted to plop my butt down somewhere completely outside my safe places.

Barcelona is one of the worlds cool cities, vibrant culture, amazing architecture, and a welcoming atmosphere for ex-pats.

Love that! Ex-pats.. the implications of the word... ex patriated.. removed from home.. the mystery... why..?

I was sick of school. Not that I don't severely need more education! But how I get educated...shouldn't be so dreary, so tedious, boring, and really so much an exercise in conforming to thought and conclusions reached by people who are now tucked safely into tenure and self validated wisdom. ( you know I'm taking about you JT, if you would ever deign to read what I write without judgement of the minor aspects of my writing that are not....conforming!)

I wanted danger, to move way outside my comfortable and into a challenge, but a safe one alas. Barcelona is safe. Well except for the pickpockets and the men with the intense eyes who challenge what used to be called a womans virtue...  :)

I arrived on Aer Lingus, after a layover in Dublin, at about 8pm in the evening with no reservations for the night, no local contacts and 49.99 lbs of suitcase and 20 more of backpack.

The RENFE train got me he into the city center a little after 9. Instead of looking for a hotel, I ducked into the first place I saw that looked like a glass of wine was what they wanted to make sure I had before anything else.

For a Napa valley girl, dirty, tired and exhilarated, my priorities were straight. Wine. Then some tapas or Pintxos, and maybe later....sleep and a wash, but only if the night had no other promise.

Lugging a suitcase into restaurants actually is a really good tactic, it lets people know just who I was and wasn't. I didn't finish the first glass of a really nice red house wine before a guy was at my side being friendly. Of course that sort of thing can go either way, but he wasn't a single predator (darn?) and invited me to a table of other people who wanted to keep their own night interesting by grilling a new arrival.

I ended up on the couch in the flat of a couple of german girls who thought California was some magical place inhabited by cool people. Who'd a thought just being from Cali was an entrée to the cool circle internationally!

And then, friend of an acquaintance of a friend, and a few days later, I had a room with a couple in El Raval.   Carrer de la Paloma, 11, 08001 Barcelona, Spain

I'm home in Yountville with my Dad for a couple more weeks, then back to the adventure.

I'm so tempted to take a ferry down to north Africa...it's a direct connection from Barcelona to Tangier Morocco...35 hours!..but worry the later day Barbary Pirates or some such horrors await. I'll save that for a group outing..

I can easily hop up to France, six and a half hours to Paris, a couple hours to Perpignan across the border.

But what have I really been doing there? Walking around. Eating too much. Drinking too much. Reading a lot. And just getting comfortable. Oh yea...writing a bit, my real reason to distance myself from the known. 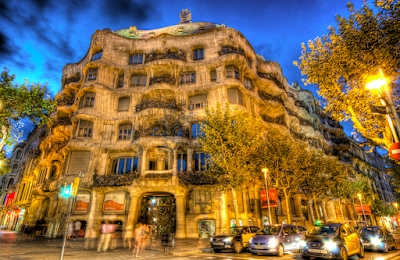 What a change from California where there is not much that is over a couple hundred years old, and most is boxes built for economy, embellished only with cheap flourishes to mimic architectural styles.

Architecture is the art of accommodating people in and around buildings. It can be beautiful or utilitarian, fanciful or horrid. It effects how people feel about a place, and the identity they generate for a it.

Barcelona is profoundly shaped by both.

Gaudi and catalan, (and the associated lust for independence from Spain). 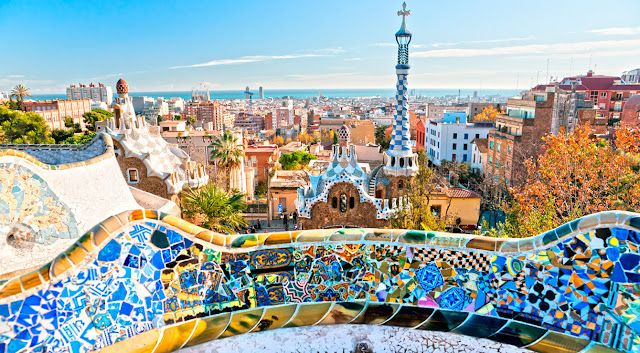 Posted by Chloe Smith at 3:49 PM No comments: Links to this post