I'm moving in with a man!

Schools out. Yeah! But the bigger news is that I am moving into an apartment with a man! First time for me!

Remember I posted a while ago that I wanted to go back to France this summer? Well its on! I called some friends there and asked how I could go about getting myself a writers garrett and how much it would cost in Paris, and it turns out that it is ridiculous! Pretty much anything on the short term was over €1,500 a month. Thats $2000ish. And that is for a studio/room in a not so good neighborhood.

That would be stupid, worth it, but irresponsible. My budget is €3000 for everything, the whole summer ($3800). I've got an $1400 round trip flight, on Finnair via Helsinki! And heres the beauty, my friends know a man who has a 2 room apartment in the 14º Arrondissement where Hemingway, Henry Miller, Fitzgerald, TS Elliot, Alice B Tolkas and Gertrude Stein famously lived and wrote!!

€350 a month (X 2.5 months) for a nice safe quiet room and full use of the apartment!!! I'm going to cook myself, no money for eating out, but what I really want to do is discipline myself to write at a set time and for a certain number of hours or words each day.

For fun, I get to walk around Paris! I'll probably get a Metro pass too, but thats about it for spending. Food, Wine, and shelter and being in Paris should be a plenty rich experience.

My landlord/roomate is a fairly recent widower, so we have something in common, but comes highly recommended. He was a civil engineer and has lived in many different places, Morocco for a while and Algeria, and Tahiti. He speaks English too and is in good health and people say he is fairly mellow and will enjoy my company. I plan on getting him talking and maybe I can use some of his life in future characters.

My Grandma is worried he will hit on me, and that I will certainly get robbed if not raped if I am out in public after about 4pm, but those are risks that I take in San Francisco too. Well maybe not men hitting on me!! Secretly I sometimes even encourage that! And imagine a grandpa aged man hitting on me?!!? Actually I can! What I would like to experience is it done so well that I would consider it. I wonder if age and experience really can win over youth and vigor? Don't worry, I'm not going to encourage it there! But the thought of it...could be a novel? What was that old movie with the kid and the old woman? Wouldn't it be nice if relationships were primarily something other than a good match of physical attractiveness? (Note to Greta: something to explore).

I don't even know the man yet and her I go off imagining! Could be too that he is grumpy and doesn't like the sound of my fingers on keys for hours! I'll have to be Chloe the mouse and scuttle around tying to be inoffensive! Imagine! Me inoffensive? Ms Blunt who laughs like a horse!

So...I leave July 4th. Probably return mid September for school. Or maybe never be heard from again, vanishing into the world at large, so far from where I am known. Nah, gotta a book to write! Maybe this time even published by someone other than myself!!

Posted by Chloe Smith at 4:31 PM No comments: Links to this post

Telepathic rainbow unicorn named Clancy who serves me, and a male panther who shapeshifts into my occasional lover but has no name. 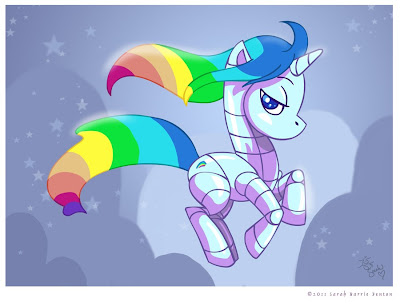 
Then, inspired by my last answer, wrote a little bedtime story for my kids, (hopefully it will be useful if I ever fall in love, have kids and remember where I filed it!)(Or get knocked up, abandoned by the guy and need something to swat the flys away from my brats in the single wide in Barstow)

Clancy was a unicorn. A rainbow unicorn. And he was telepathic too!

He started out at as a MyLittlePony toy of a little girl named Chloe, and grew with her feeding off her love, and her thoughts, until he was big.

Now he was 15 hands tall, bigger than any unicorn, in fact he was the size of a Horse!

Clancy glowed in colors, and not just one color at a time, but all the colors of the rainbow! And all at once too!

Of course only Chloe could see him. He was specially for her. He helped her.

If Chloe was sad, her trilled in the special voice that unicorns have, and pushed his colorful glow out of him as strong as he could! That alway made Chloe happy!

And when Chloe was happy, Oh My! Clancy ate up the happiness coming out of her and grew stronger and bigger and even brighter!

Chloe was happy a lot, so Clancy was big and bright!

Clancy had a special power too, that he only shared with Chloe, he could tell what other people were thinking. He used this power to help and protect Chloe.

Chloe had another special friend, but he didn’t have a name. He was a big cat, a black panther! He was scary to Clancy, because he had teeth! And eyes that stared without smiling too much. He looked like something that could eat a unicorn for breakfast!

He couldn’t stay a person for too long though, so he usually was skulking around in the shadows where Clancy couldn’t see him.

Now that Chloe was grown up, the panther would still follow her, and sometimes he would leap out at her with the claws out and his teeth bared, and then at the very last moment, he would change into a handsome young man, and he would kiss Chloe.

Chloe still pretended not to like this, but Clancy could tell with his special powers that she really did. It still made Clancy uneasy though.

One day when Chloe went on a nice bicycle ride in the country, with Clancy trotting along behind and the panther sneaking from bush to bush waiting to pounce, a bad wizard and his minions jumped out from behind a tree, knocked Chloe off her bike, through a net over the panther and lassoed Clancy!

The pulled Clancy into a horse trailer and sped off before Chloe could get up and before the panther could bite his way out of the net!

Chloe was not hurt but she was so very angry and very very sad too. Clancy was her friend from when she was little and she knew the wizard would not be nice to him, and maybe even try to make him do bad things!

The Panther saw how sad Chloe was and he was angry too, so he shifted into his man shape, jumped on Chloe’s bike, told her to sit on the handle bars, and using all his strength, peddled so fast that they caught up with the wizard at the stop sign at the end of the road!

The wizard jumped out of the truck towing the trailer with Clancy in it and laughed at the young man and Chloe on the bicycle.

“Maybe you can catch me”, said the wizard, “but there is nothing a young man and a silly young woman can do to stop me!”

Just then the panther changed back into his panther shape, leaped onto the wizard and ate him!

Chloe set Clancy free and the wizard’s bad helpers all ran away in fear.

Clancy was so happy! And now he was no longer afraid of the panther either! He knew that the panther was his friend too!

So the three friends, Clancy, the Panther and Chloe went home to have some cookies and milk, some panther food and some nice fresh grass.

Now, and ever since the panther ate the wizard, when the panther burps, sparkles come out his mouth, even when he is in his human shape.

So if you see a cute young woman named Chloe, talking to someone named Clancy that you can not see, and waving her hand around in front of her face like she is trying to make sparkles go away, you will know the three friends are living happily ever after!